Human rights activists, who voiced their support for families of victims of those killed and injured during the anti-Sterlite rally in Thoothukudi on May 22 last year, have been humiliated by the district administration and Police, Henri Tiphagne, executive director of ‘People’s Watch’, a Madurai based human rights organisation, said.

Tuticorin: A year after 13 anti-Sterlite protesters in Tuticorin were killed in police firing, civil rights activists have accused the government of doing little other than providing Rs 20 lakh compensation and a bottom rung government job to the victims’ kin. Not one government official has been held accountable so far for the incident and the government’s disinterest in providing rehabilitation to the devastated families is appalling, say activists.

Tuticorin: The state government, whose police fired at the protesters in Tuticorin killing 13 people one year ago, seems to believe that parameters of justice is providing Rs20 lakh compensation and a bottom rung government job to the victims’ kin. While no single government official has been held accountable so far, the government’s disinterest in providing rehabilitation to the devastated families is appalling, say activists.

External Source
Madurai: Legal battles go on a year after death of 13 protesters

MADURAI: If it was not for the high court intervention and the timely judgments, things would have been worse in Thoothukudi," read a report from NGO People’s Watch, which was released during the first anniversary of the Tuticorin police firings, in which 13 people were killed and hundreds injured.

The courts made several significant directives in the case which rattled the conscience of the public in recent times. If not for the court’s intervention, the investigation would have still been with the state police and not much would have come out of it, said the NGO. 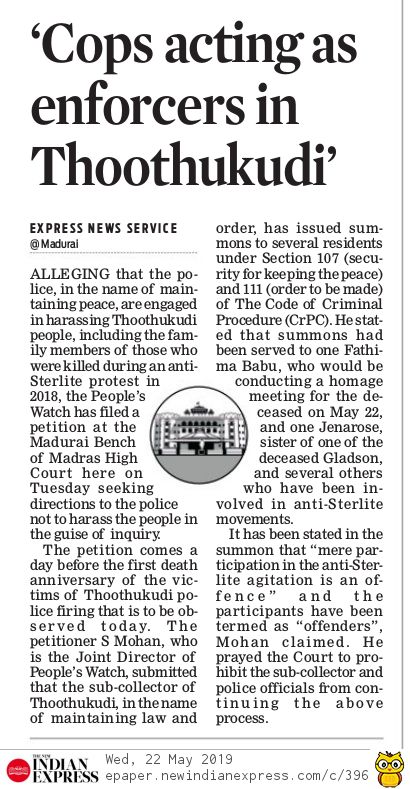 Madurai: People’s Watch, a human rights NGO has released a report titled, “A year after Thoothukudi Burned’ on Monday, which has recommended to the government various aspects relating to investigation, compensation to victims and legal help. The report comes ahead of the first anniversary of the police firing at anti-Sterlite protestors, in which 13 people were killed. Stating that it is unfortunate that despite one year no one has been held accountable for what happened in Tuticorin on May 22

‘Proceedings initiated against 100 people who protested against Sterlite’

The Thoothukudi district administration and the police have initiated proceedings against at least 100 people who took part in the protests against Sterlite Copper, said People’s Watch, a human rights organisation, in Madurai on Monday.